Tired of the American Dream

I have come to find joy in change. Among the changes, the one that gives me most pleasure is when something changes how I look at the world. Something that helps me align myself with reality. Not many things have that power, but Malcolm Gladwell’s Outliers makes that list.

In it Gladwell argues that the story of success is not based on a few simple things that successful people did correctly. It has a lot to do with where they are from, what period they were born in, and how they came about finding their ‘art’.

He talks about the 10,000-hour rule which is based on some academic studies. He finds those who are exceptionally good at what they do, have spent more than 10,000 hours doing it.

Although, as the title suggests, Gladwell writes about successful people who lie outside what is statistically plausible, I believe his thesis can be applied to less successful people. When you do that, you realise that the American Dream falls flat on its face. 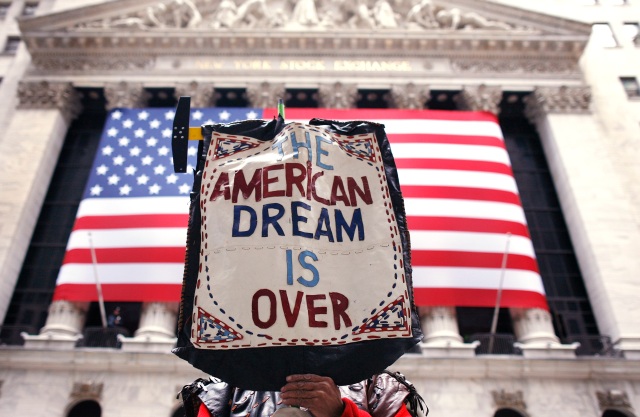 The version of the American Dream that I am attacking is this one – It doesn’t matter who you are, where you are from and what you’ve done in your past life, if you want to succeed at something (anything) then all you need to do is work hard to get there.

It’s mistaken to believe that only hard work will bring you success. It might enable you to become good at something. You may get recognised (in some way) for the work you do but success is a whole different ball game. There is no magic formula for success. All one can hope to do is take tiny steps in a direction which feels right to them. Whether that leads to success isn’t something that they can predict. The factors involved in such a prediction are too many to be aware of and most of them are beyond control.

People seem to believe that they have a lot more control on their lives than they really do. It’s this false hope that the American Dream gives people which is most worrying.

The illusion of control

Another book that changed how I look at the world is Leonard Mlodinow’s Drunkard’s Walk. The thesis he puts forth is simple – randomness rules our lives. As much as we’d like, there is a lot of truth in it. And before misinterpret what he says know that he is not saying that you don’t play a role in your life. It’s just that the role you play is very limited. A lot of things just happen to you. (PS: Harsha Bhogle admits it.)

This should in no way ‘demotivate’ you. Instead, it should motivate you more because, if you care enough, then you can find the few things that you really have control over. And once you find them, you should do all you can to influence them in your favour.

Accepting that randomness plays a vital role in your life only helps you to align with reality. It equips you to deal with the illusion of control and face the world more confidently. Swallowing this pill might be hard, but it’s worth a lot more than the pain.

Akshat Rathi is a science journalist. He has previously worked at The Economist and The Conversation. His writing has appeared in Nature, The Guardian and The Hindu. He has a PhD in chemistry from Oxford University and a BTech in chemical engineering from the Institute of Chemical Technology, Mumbai.
View all posts by Akshat Rathi →
This entry was posted in Philosophy and tagged american dream, change, illusion of control, randomness, reality. Bookmark the permalink.

1 Response to Tired of the American Dream